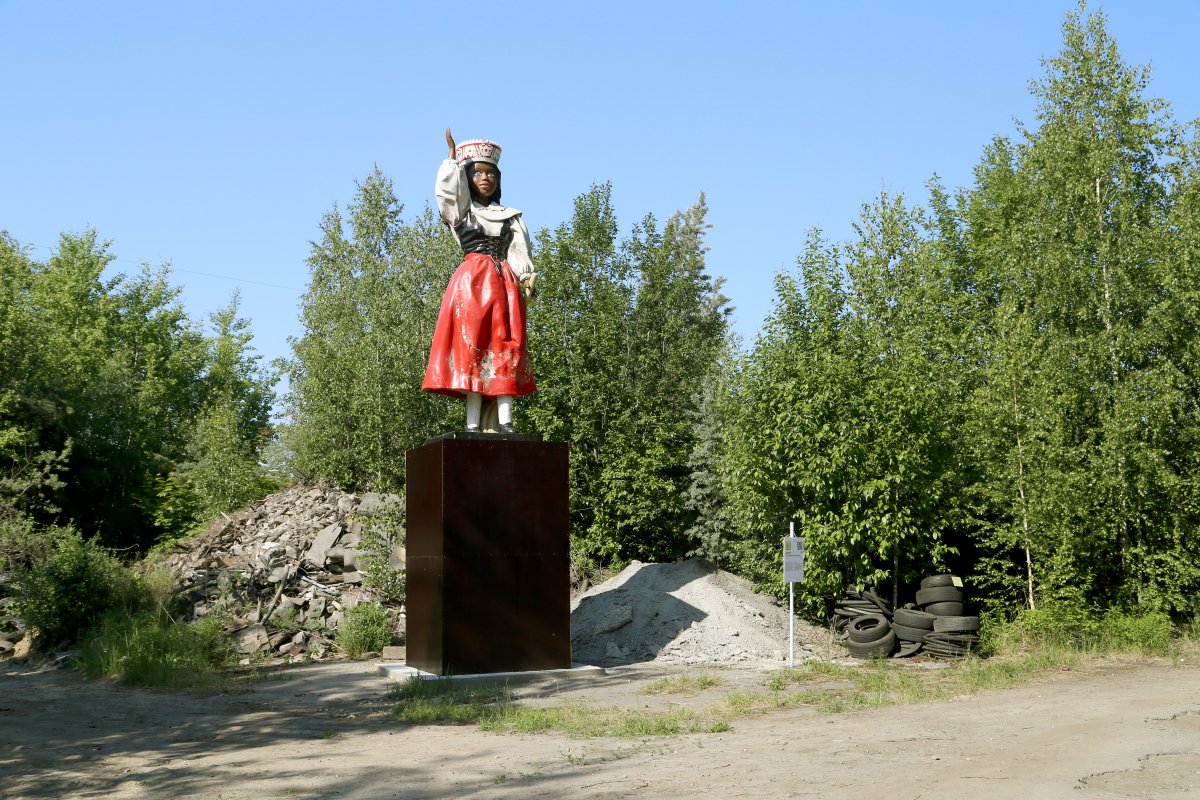 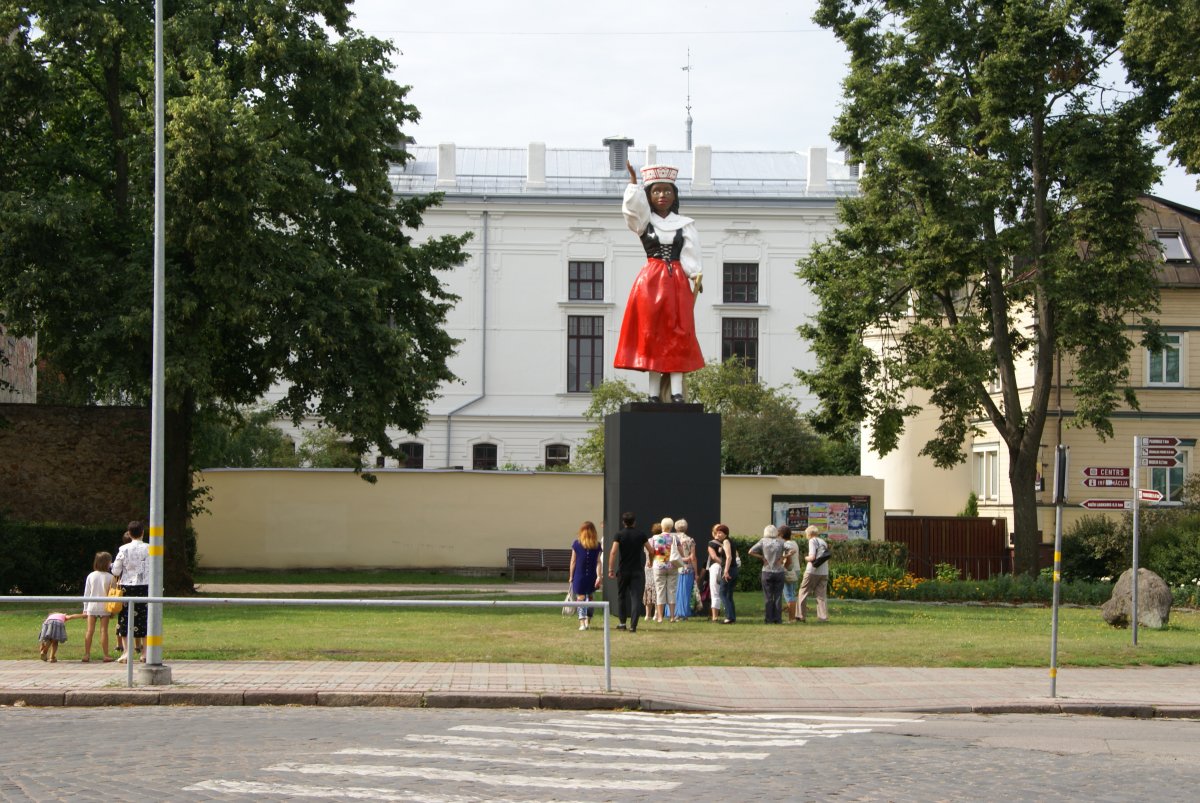 The sculpture, titled Black maiden, was first exhibited in 2014 as part of the Monument Wars installation, which was one of the projects of the programming for the European Capital of Culture - Rīga 2014. For more than eight months, the installation was located at the crossing of Brīvības and Elizabetes Street, at the site of the former Lenin Monument. It consisted of a platform with four changing sculptures playing upon the cultural heritage that the former great powers ruling in Latvia had left here. By turning to the background of historical change in Latvia, which had affected the development, fate and culture of the capital, the project strove to display the multicultural diversity of Rīga. Each monument addressed one of the four cultures that had substantially affected the history of the Latvian territory and aspects of Latvian identity. Poland and Christianity was symbolized by a wooden replica of a Virgin Mary sculpture. Germany and nationalism was represented by a rendition of Kaiser Wilhelm I. An object based on a sketch by Gustavs Klucis represented Russia and the revolution, while Sweden, openness and a multicultural society was embodied by a black Barby in Swedish folk attire. The artist chose to symbolize Sweden and the idea of an open, multicultural global world with a black Barby, the prototype of which he had stumbled upon on eBay.

The original work without restoration is on show at Mobile Museum. The Next Season.

“Using the Barby doll, we want to reveal the ubiquitous presence of global culture and economy, as well as the intervention and huge pressure of American culture. Every day we watch American products on the TV, Hollywood movies have taken over our screens… Since the Second World War, Sweden has been a country open to immigrants. Swedes see great benefits and opportunities arising from this openness. The Black maiden is also a story of the relationship between the global public and the roots of local culture. These often paradoxical amalgams can’t be seen in black and white, as having only benefits and drawbacks. After all, a young black man is living in Latvia, an African Latvian dancing at the Song and Dance Festival.”

- An interview with the artist about his Black maiden

As part of the open-air urban programming of the Discover Your Amber art forum organized by the Great Amber concert hall in 2015, the Black maiden assumed a new form and concept. It was dressed in a Latvian folk costume and was renamed Libau-Halifax-Libau. The sculpture was placed at a meaningful location at an urban setting in Liepāja, western Latvia, namely at the intersection of Kūrmājas prospekts and Graudu Street. The place is near the former site of the Russia-Eastern Asia Steamer Society, which carried migrants, inter alia, on the route between Liepāja, New York and Halifax. Alluding to the location, a new conception was created in Liepāja’s urban setting, with the Swedish maiden becoming a girl named Milda, whose great-grandfather Jānis Liepiņš left the Russian Empire on the Libau-Halifax ship in 1906. Milda had returned to Liepāja after 109 years to discover her roots.

In 2016, the sculpture was placed on the roof of the summer house of the Art Needs Space foundation (Rīga, Kalnciema Street 36/38), holding an Easter Bunny in her hands and wishing happy Easter to Rīga’s inhabitants and visitors.

In 2018 the sculpture, fitted with a foundation made of roots and twigs, was exhibited at an interdisciplinary show titled ORIGINS/Textile as Concept and as a Material Aspect of Latvian Identity at the Rīga Art Space (curator Elīna Ģibiete). The show took place to commemorate the 100th anniversary of Latvian statehood. Exhibited were works reflecting upon the theme of national identity through the lens of tradition, habit, symbols and everyday objects. Thematically, Aigars Bikše’s Libau-Halifax-Libau continued the narrative of the return of the black Latvian maiden after more than 100 years in exile, touching upon the significant topic of the Latvian diaspora in the world and their belongingness to their land.

Aigars Bikše (1969) is an artist best known for his large-scale interactive sculptures and installations in public spaces, which combine different sociocultural and political references, with his artworks sparking a reaction from the public. He holds a master’s degree from the Sculpture Department of the Art Academy of Latvia (2000). He has been participating in exhibitions since 1999 and has been among the curators of the Rīga 2004, Rīga 2008 and Rīga 2012 Sculpture Quadrennials. Aigars Bikše is also the founder and head of the Art Management and Information Centre (MMIC). He is a professor at the Art Academy of Latvia.