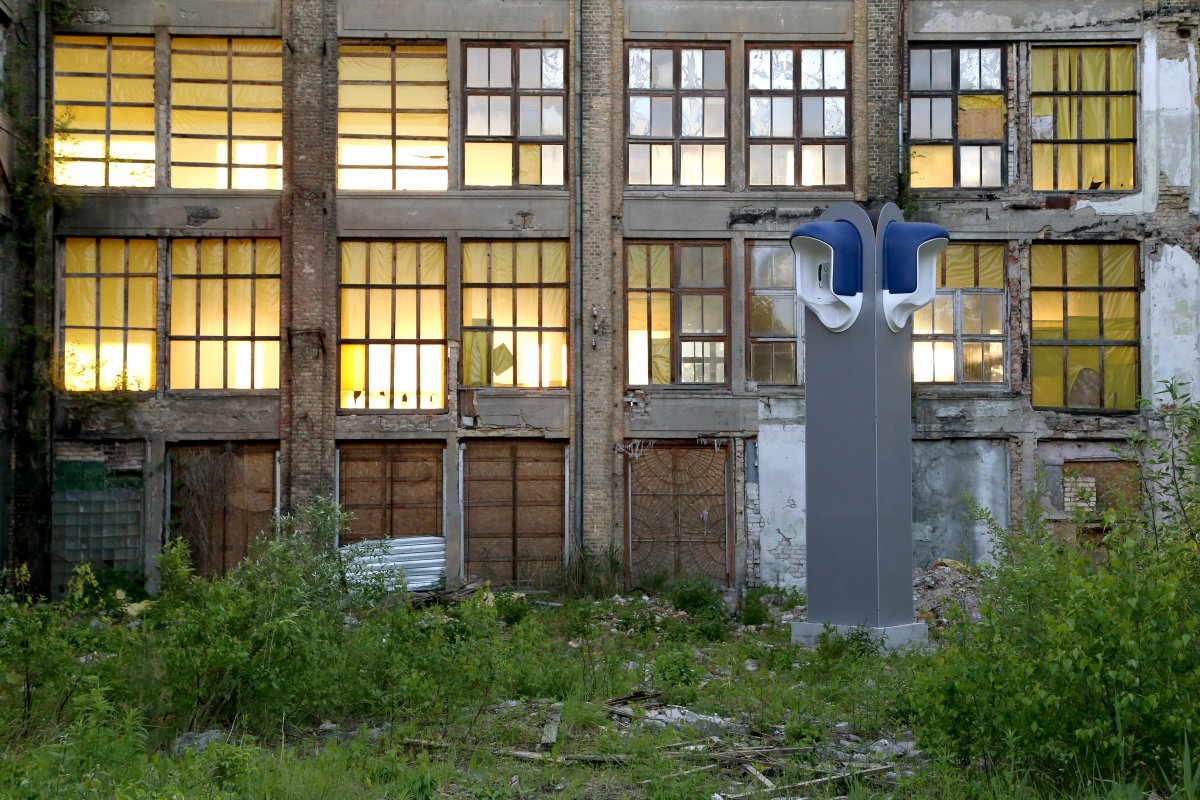 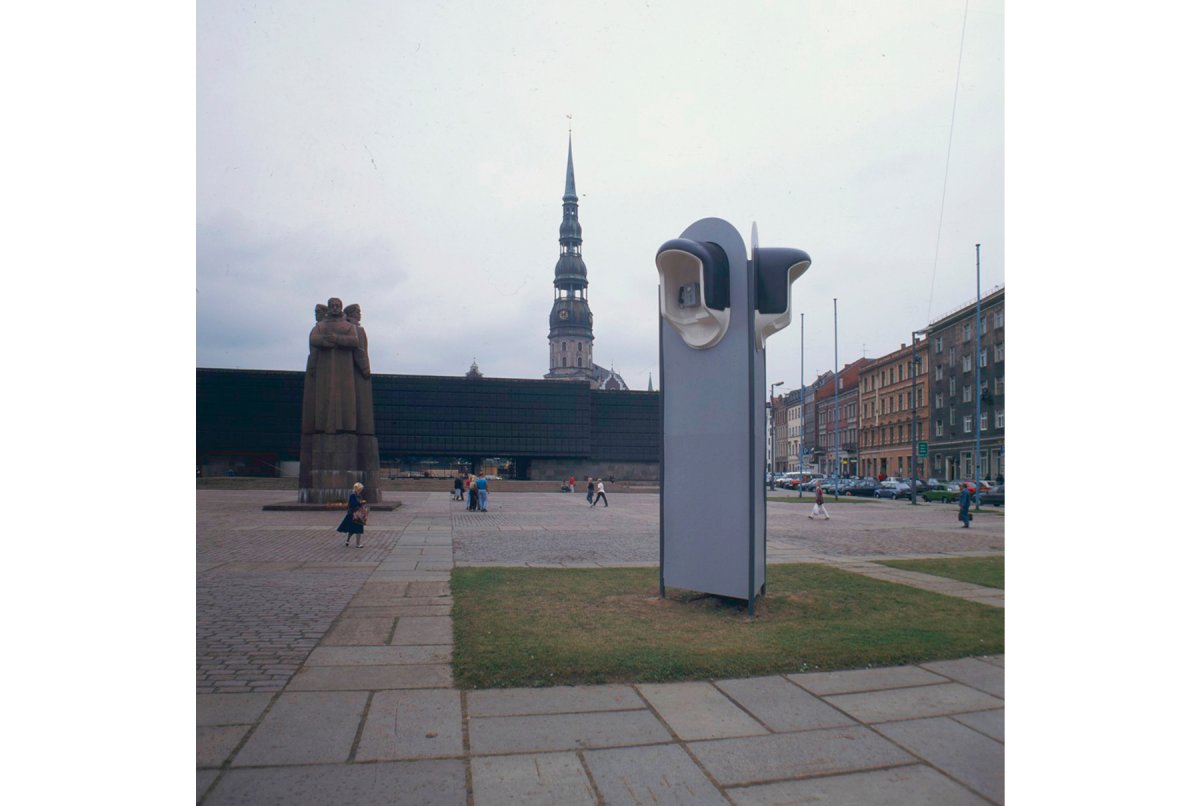 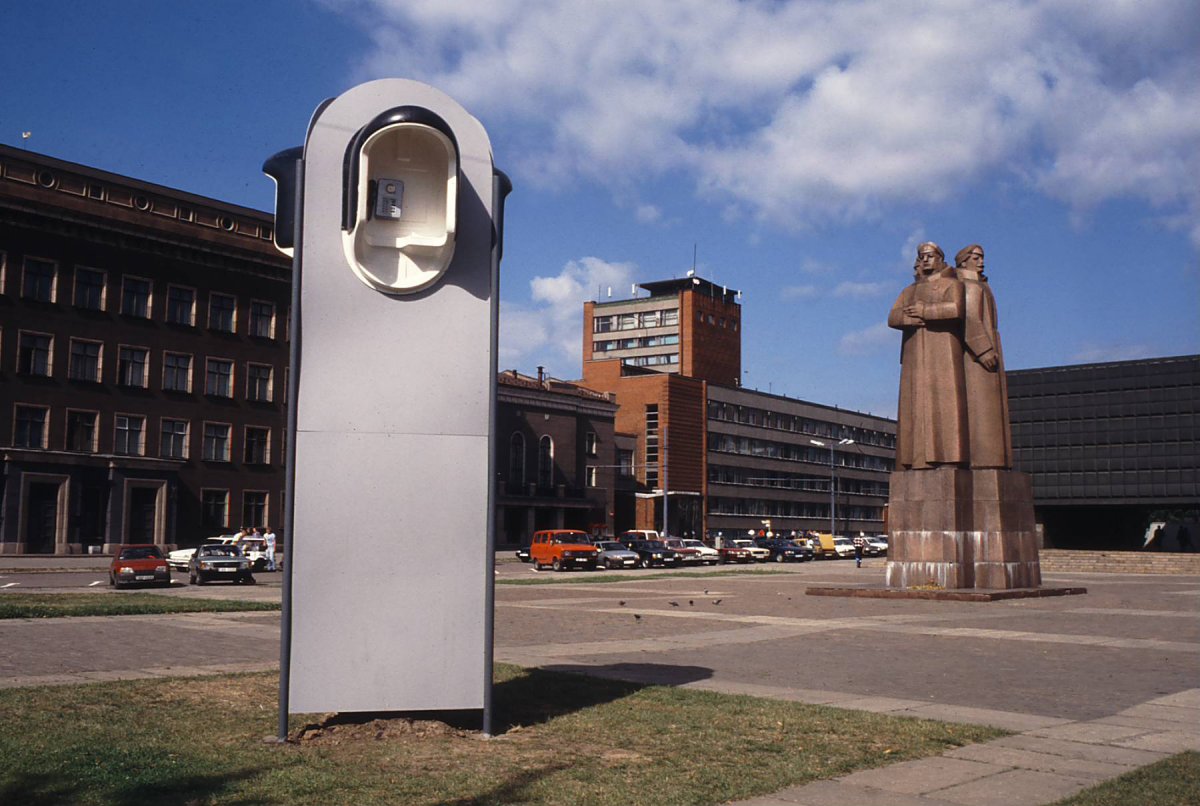 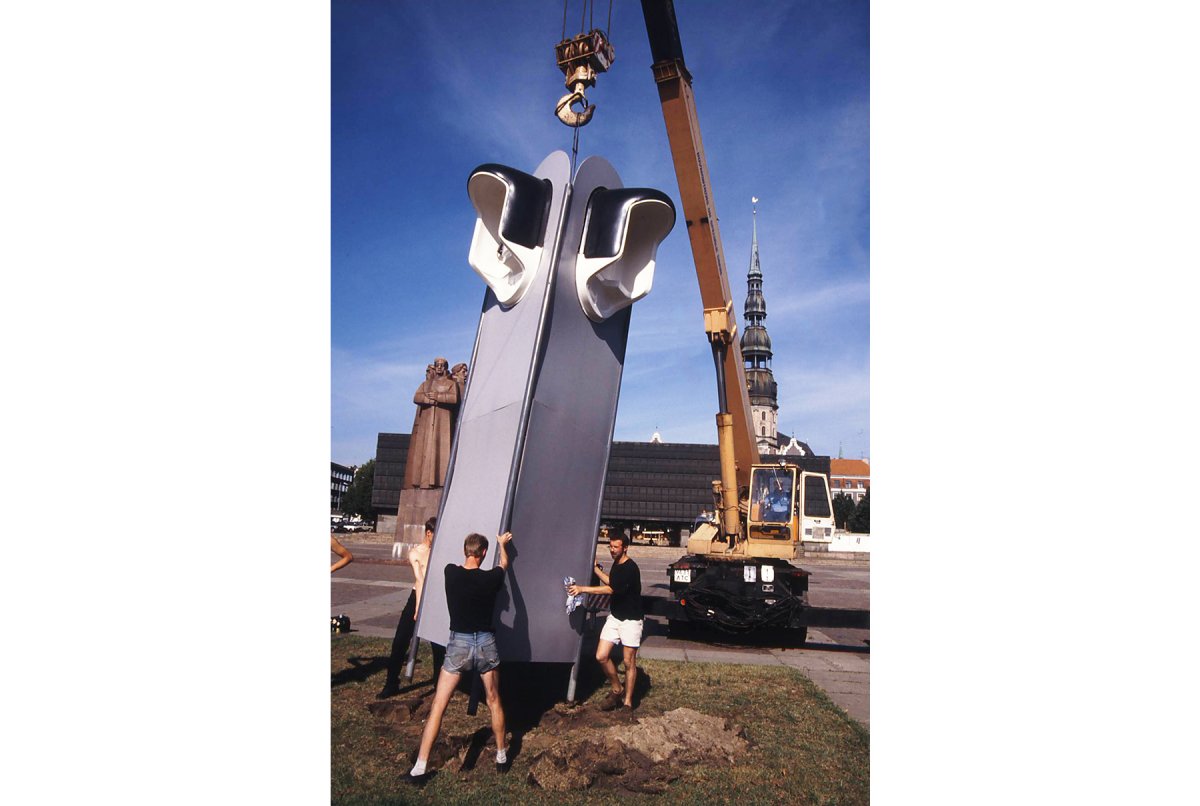 For Local Calls was was created for the third annual exhibition organized by the Soros Center for Contemporary Arts-Rīga, titled Monument (curator Helēna Demakova) and held in 1995 within the urban environment of Rīga. This project strived to emphasize the clashes between the power symbols of different eras, with works being placed at the sites of former monuments or places with a dense confluence of historical meanings. Ēriks Božis’ work was set up at the Strēlnieku square and took the form of an outdoor art installation, which, by referring to the three figure-composition of the Latvian Riflemen Monument, engaged with the square’s historical environment and the ideological background of the era.

A restored and reconstructed original is on show at Mobile Museum. New Season.

Three telephone booths fitted with payphones have been attached to a triangle-shape prism. They are placed just high enough to be out of reach and rendered unusable.

This monument depicts the standard principles and the most traditional operations used to build monuments.

An example: distancing an everyday object from its usual environment by placing it on a pedestal, in this case literally elevating it above its usual height. The condition for every monument is communication with the environment and people around it, that’s why in this case the object of contemplation is a telephone booth, an unmistakable symbol of everyday communication. At that, being designed (elevated) as a monument, it no longer operates on its previous level, as the distance has been, literally, increased.

It is a distance between the “lofty” telephone and the payphone chips one usually has, for example, in their pocket. The chips are a part of this communications system as well, and the name of the monument, For Local Calls, is written on them as well.

The telephone booths with their backs together and the AUTOMATIC telephones [word play, the Latvian automāts, also means, ‘rifle’ – translator’s note] refer to the RIFLEMEN on the other side of the museum.

Ēriks Božis (1969) is an artist who uses different forms of visual arts. He has made installations, art for public spaces, video installations and photos. He graduated from the Restoration Department of the Liepāja Art and Design Secondary School and has participated in exhibitions since 1992. Ēriks Božis’ works have been featured at the Latvian National Museum of Art, the Latvian Museum of Photography, Stockholm’s Moderna Museet, the Manifesta 2 European Biennial for Contemporary Art, the Rauma Biennale in Finland, the 11th Venice Biennale of Architecture, the International Contemporary Art Festival Survival Kit and elsewhere. The work Wind Pavilion (2020) is among his more recent works featured at an urban setting; it was exhibited on the beach of Liepāja, western Latvia, and created as part of the Together public art programme.