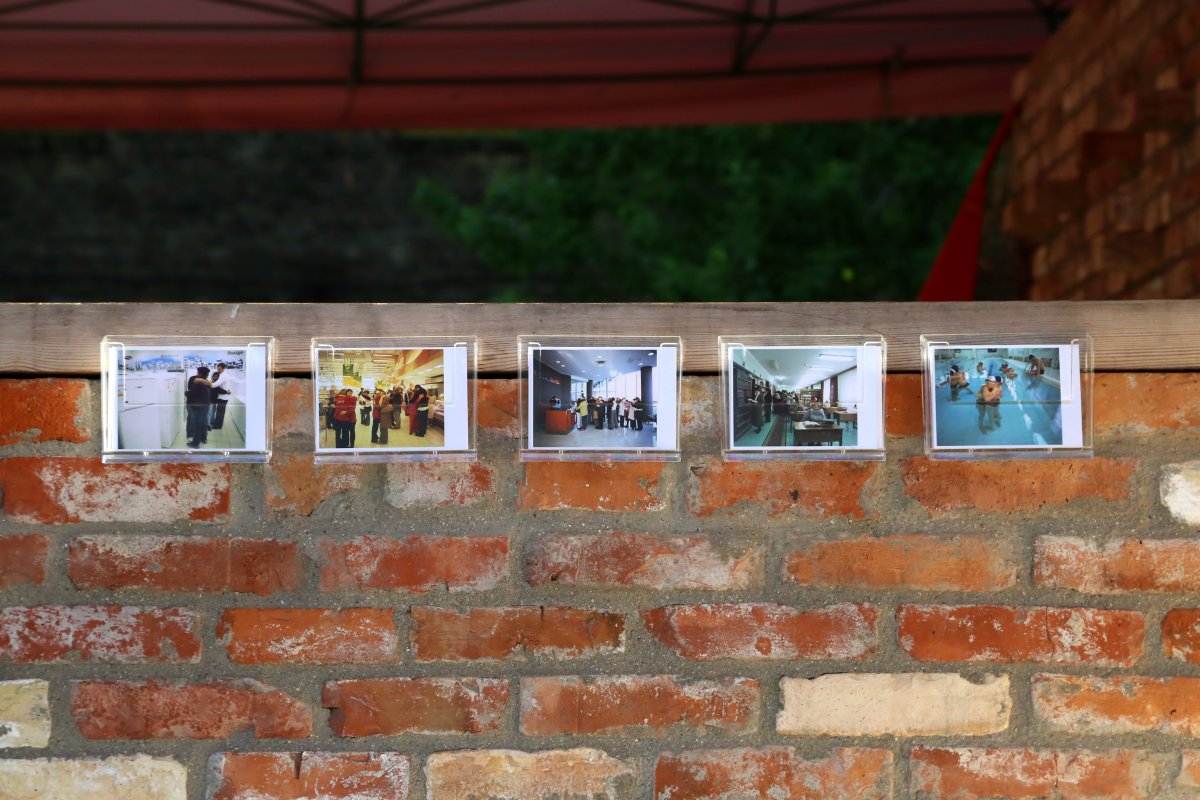 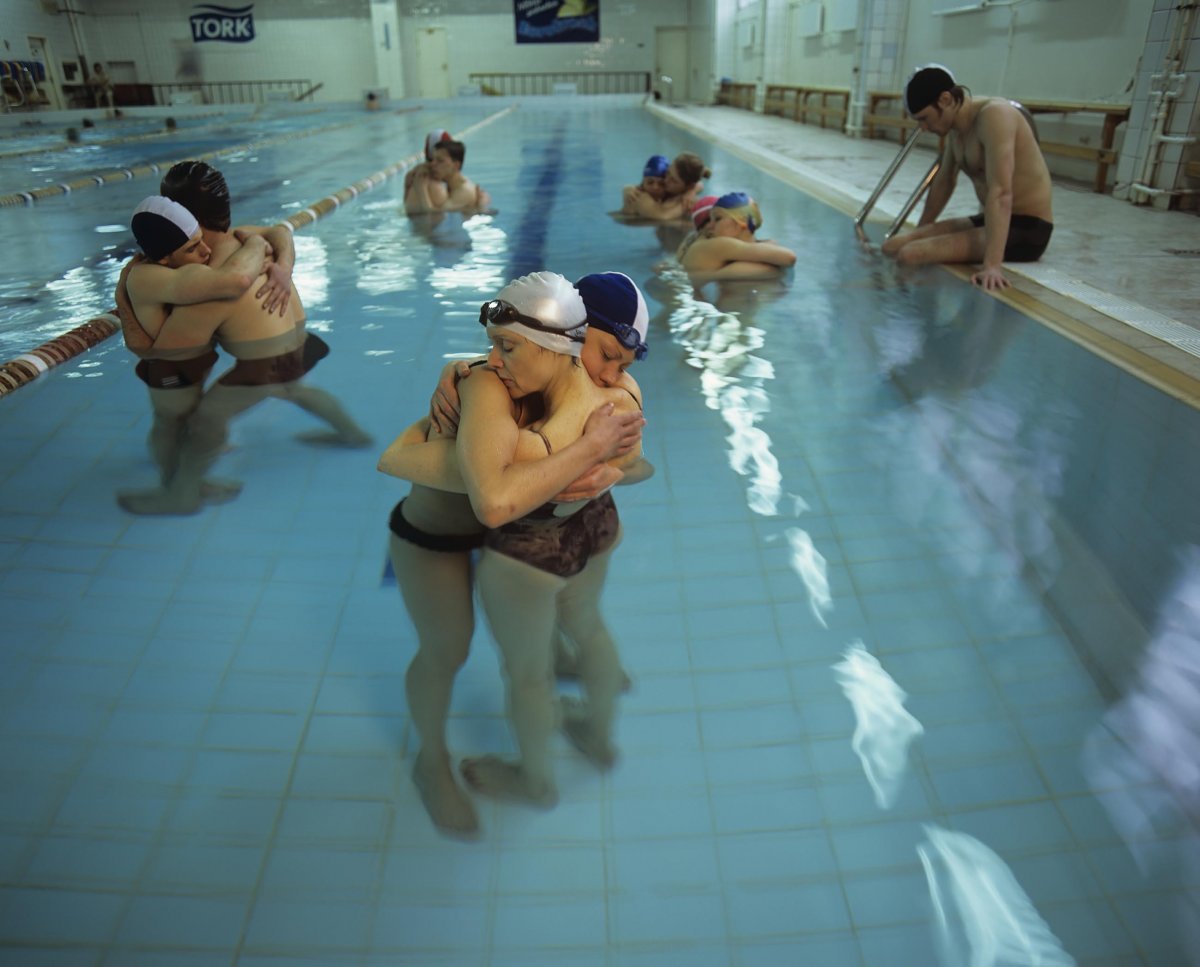 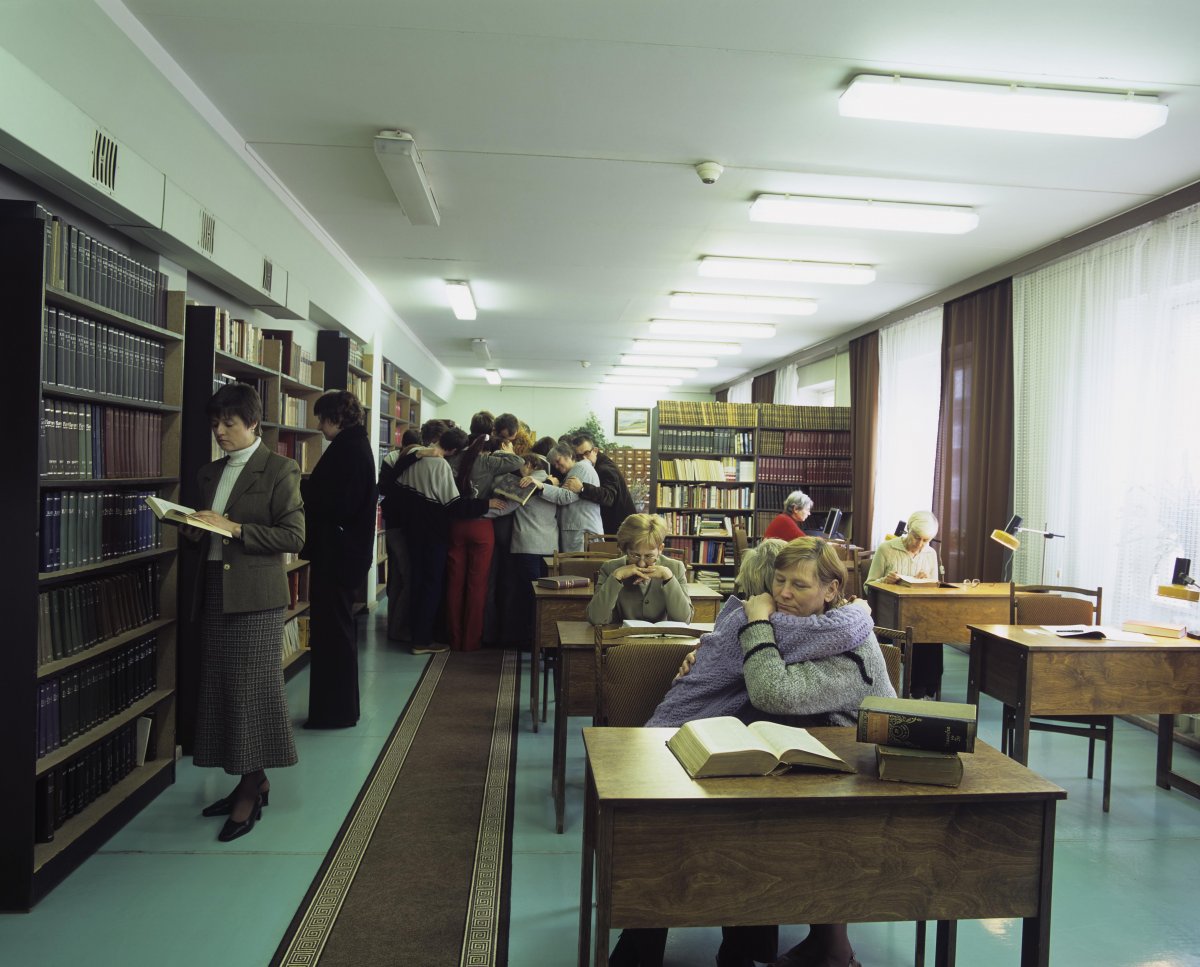 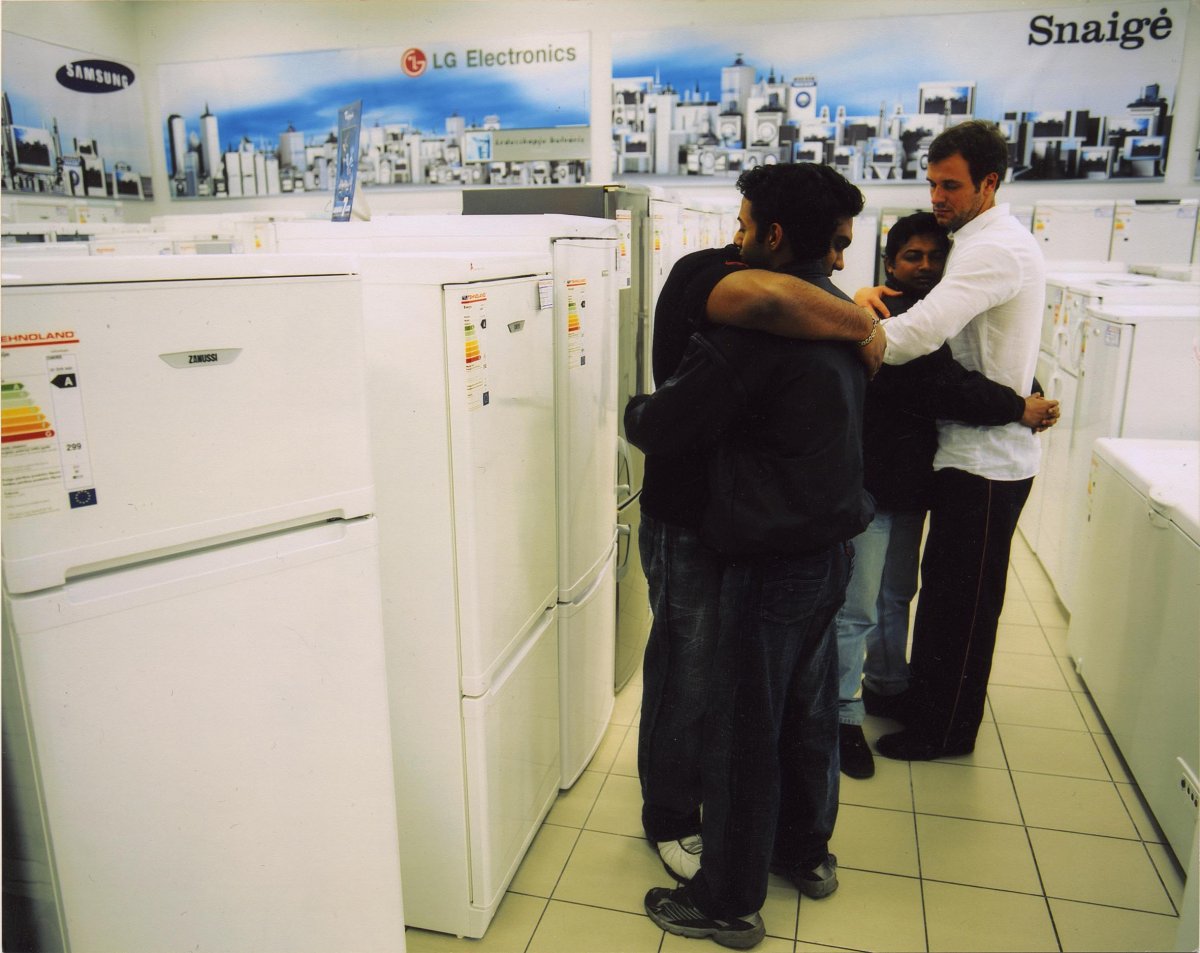 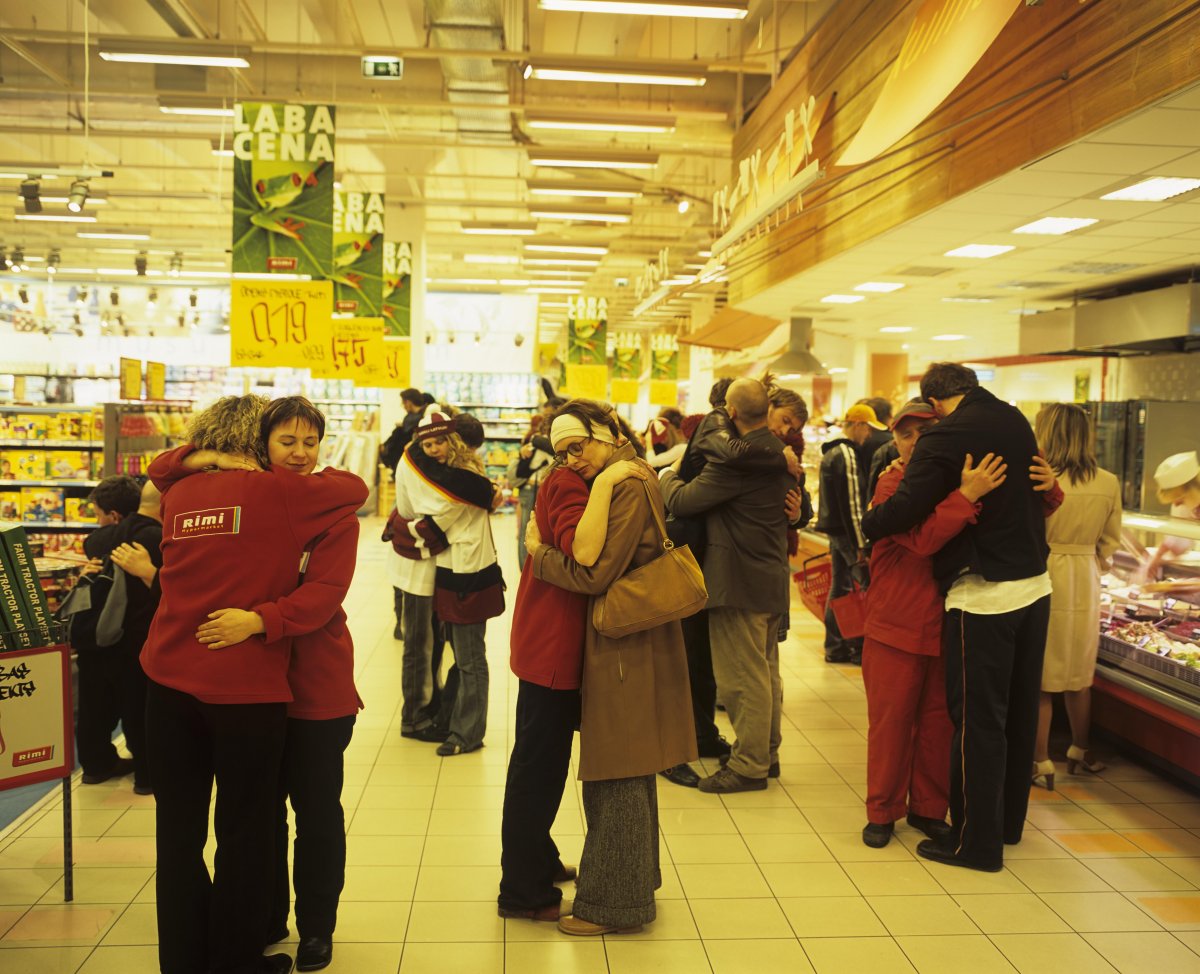 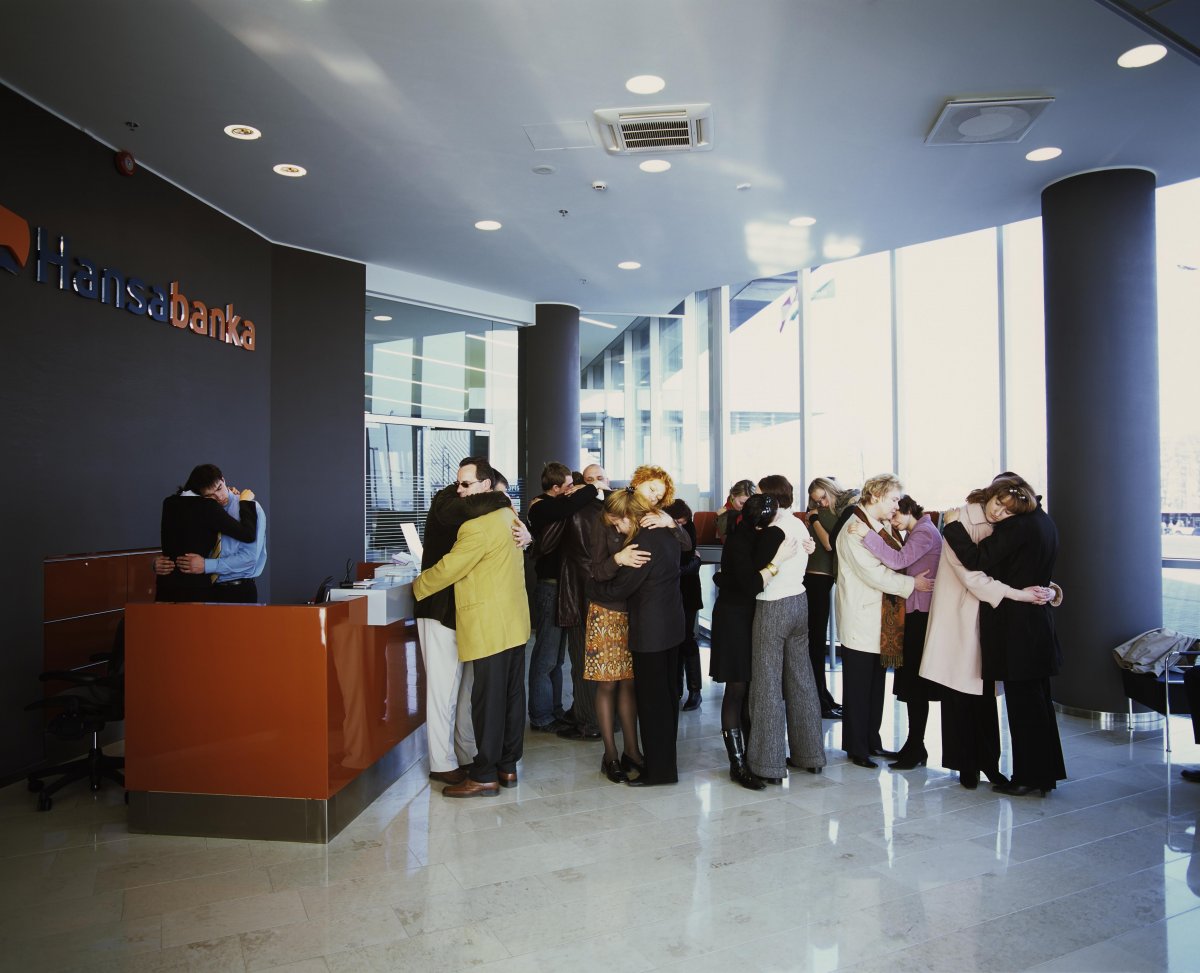 The Kind Regards from Rīga photo series was created in relation to the New Rīga Theater play, Ice: A Collective Reading of the Book with the Help of Imagination, based on a novel by Vladimir Sorokin. This production came up with a provocative view of humans and their relationships. It was transformed several times, in Frankrut, Gladbeck (at the engine room of the Gladbeck colliery during the Ruhrtriennale, 2005) and in Rīga (for the Homo Novus festival).

For Mobile Museum. The Next Season, the photo series has assumed the form of postcards, which every visitor can take home with them.

The photo series was taken during rehearsals, as actors tried to depict the protagonists of the novel, speaking with one another wordleslly, in the language of the heart. “During the process, a need arose to try to talk in the language of the heart. Upon meeting someone you know, an embrace usually lasts just a couple of seconds. But should the embrace last longer than that, one experiences a broad spectrum of emotions, initially awkwardness, confusion, anxiety and sometimes even physical feelings of resistance. But there comes a moment when the distance is overcome and one is taken over by a general feeling of brotherly love.”

The photos were taken at locations where physical contact is seemingly out of place – at a Rimi store, a swimming pool, in the queue at the bank, a library, at a household goods store, in church –, with New Rīga Theater actors hugging complete strangers. The photos depict the intimacy of human being-together, with people frozen in an embrace and speaking to one another “in the language of the heart” while sharing solitude and silence.

In 2006 Monika was asked to construct a large-scale photo installation on the façade of the Berliner Festspiele during the Spielzeit Europa festival. The series was accompanied by a slogan, “It’ll be okay” (“Alles wird gut”) and involved anonymous Berliners hugging one another in different public places. In 2011 this project was likewise included in the Intersection: Intimacy and Spectacle project that took place during the Prague Quadrennial of Performance Design and Space, with actors staging an embrace inside transparent glass cases, similarly to how it happened in Gladbeck and elsewhere. During the 2020 Valmiera Summer Theatre Festival, performative hugging took place inside a shop-window. Above, there was a notice saying, “It’ll be okay”. For this performance, the artist sought out pairs of people exemplifying different groups affected by the pandemic – a senior and a youth, father and son, classmates, athletes, musicians, and participants of the Song and Dance Festival. The artist stresses that the performance is important in the context of the pandemic, seeing as hugging and physical intimacy have become something exclusive and impossible. The artist describes the changes in her work thusly: “the initial idea about inner communication, using ‘the language of the heart’, has been superseded by the necessity of physical contact. This time has shown that we cannot do without physical contact – a handshake, a hug, or eye contact.”

Monika Pormale (1974) is an artist working in scenography, installation art and photography. Since the late 1990s, Monika Pormale has been mainly working as a stage designer and costume artist. Her name is well-known to audiences in Latvia and elsewhere in Europe. The range of Monika Pormale’s works varies from pure and conceptually clear installations to historically accurate stage designs characterized by a scrupulous approach to the tiniest detail, tone and nuance, generally revealing an unquenchable interest in the extraordinary things of everyday human life and a belief in humanism. She graduated the Department of Textile Art of the Rīga Art and Design Secondary School in 1993 and the Department of Stage Design at the Art Academy of Latvia in 1998.