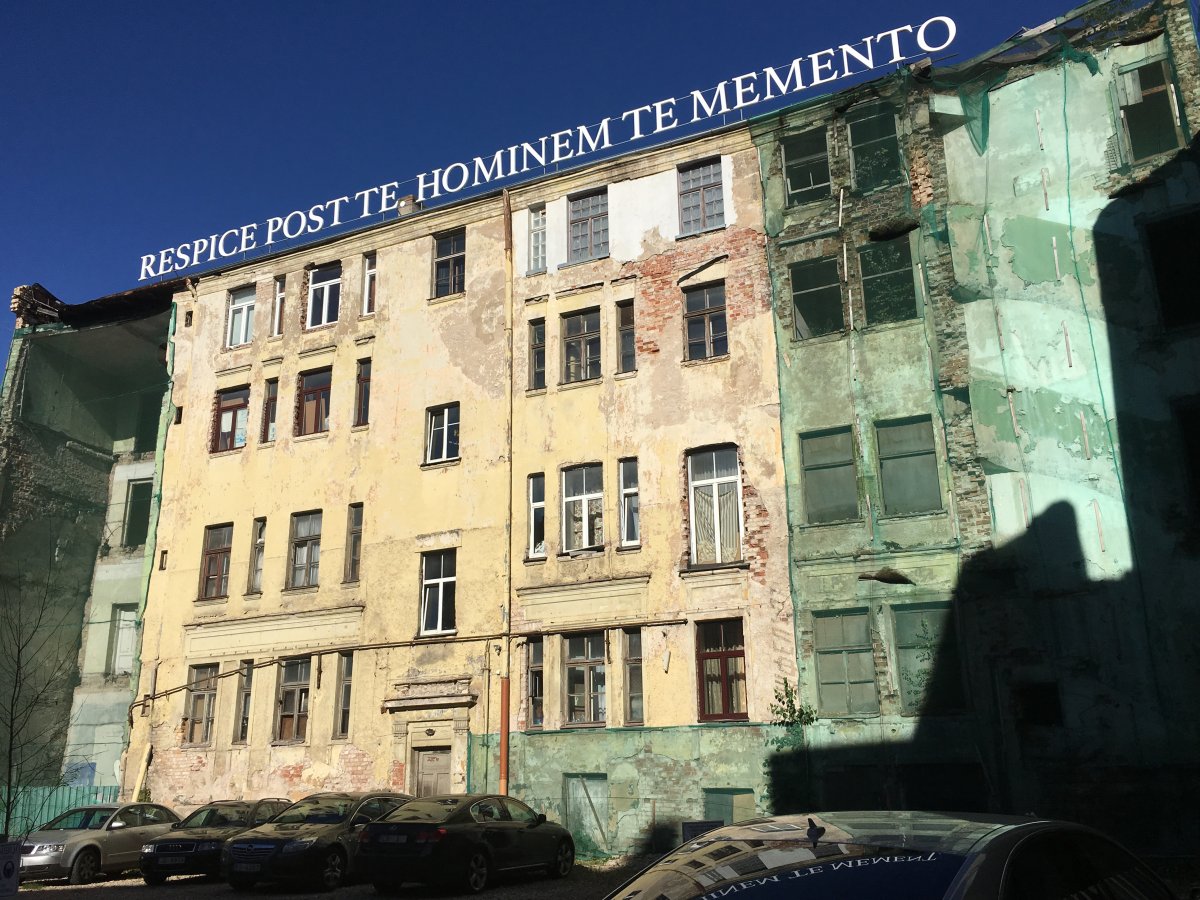 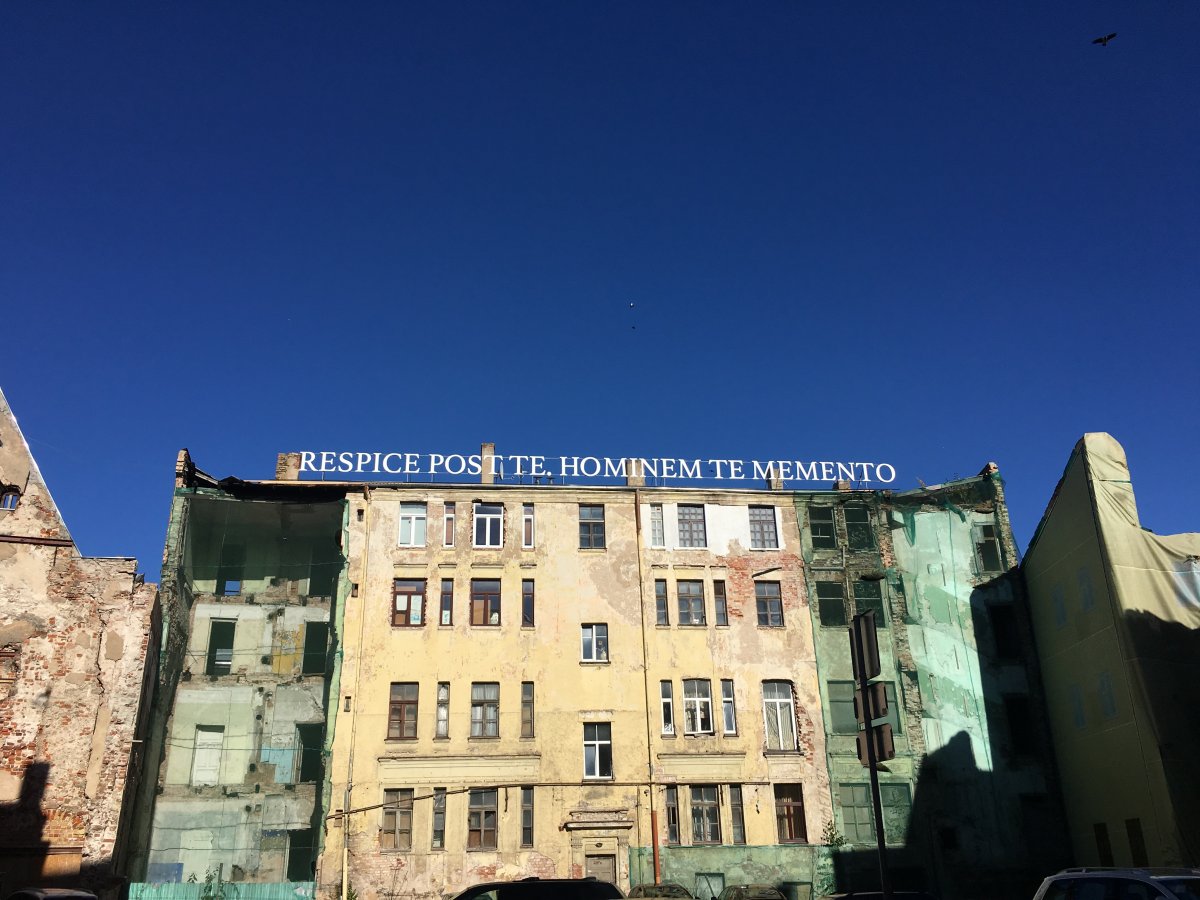 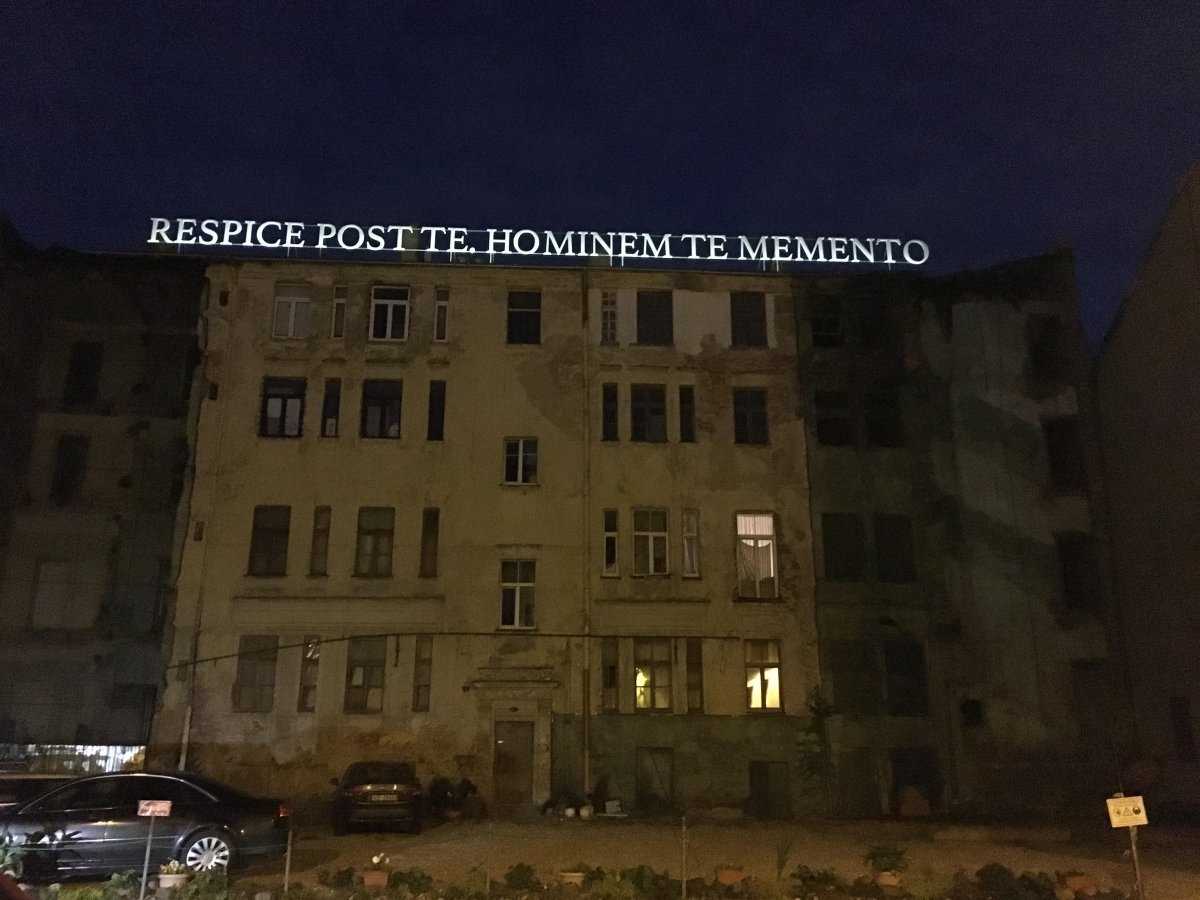 Respice post te. Hominem te memento, a work by Krista and Reinis Dzudzilo, was created for the Sculpture Quadrennial Rīga 2016 and put on show on the rooftop of an abandoned building on 30 Kungu Street in Rīga. The theme of the quadrennial was “Liberalism and Conservativism” and it laid stress upon global questions in a political, social and cultural context, addressing the understanding of national identity and the role of citizens in local and global politics.

A new version of the works is on show at the Mobile Museum. The Next Season.

Art historian Santa Hirša wrote the following for the quadrennial catalogue: “In combining the natural scenography of the city – an abandoned Old Rīga house on the verge of collapse – Krista and Reinis Dzudzilo interpret the classical motif of memento mori with the Latin proverb ‘Respice post te. Hominem te memento’ (meaning “Look behind you, remember that you are human.”). It’s a gesture reminding one of the changing nature of everything that lives, as well as of death’s everlasting presence in all things.”

Slaves in Ancient Rome were obliged to whisper these words in a general’s ear upon his return from a successful campaign, so that the general would be reminded of their presence while basking in the adoration of the crowd. The authors say that the location of this work, Kungu Street [literally, ‘street of the lords’ – translator’s note], lends extra semantic weight to the symbolic meaning of the word.

As most large-scale works placed in a public setting, Reinis and Krista’s Dzudzilo work was affected by the environment and the weather while it was on show. The work began to disintegrate physically a couple of weeks after the opening, highlighting its symbolic meaning. As birds started pecking at the foam plastic lettering, it began to lose its outline.

The work was destroyed after it was taken down in 2016, but a new version of the work is on show at Mobile Museum. New Season, with the artists offering a new version that changes the initial form and content. As the authors say, “as we mused upon the return of the work, [it became clear] it had to be transformed after traversing such time.” For this exhibition, a new notice is jutting out from a pile of rubble, with only ‘Memento’, the final word, being preserved, allowing the audience to complete the phrase ‘Memento mori’.