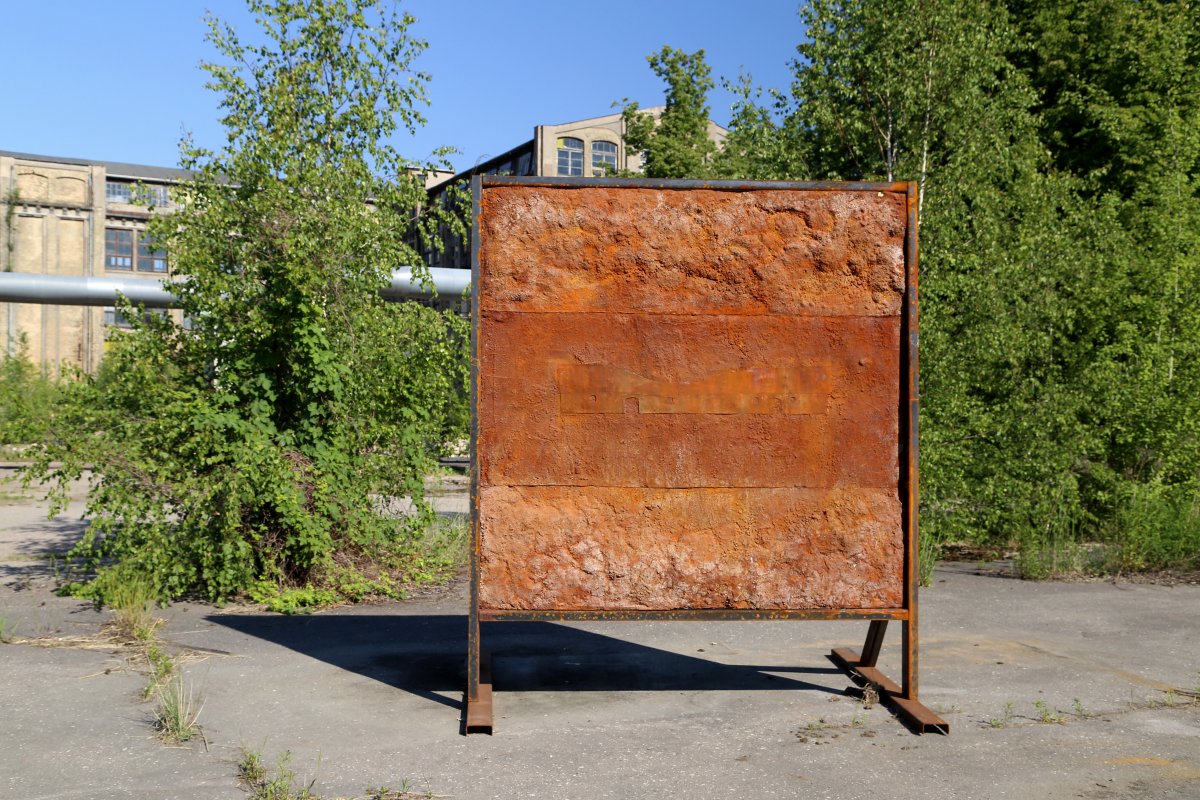 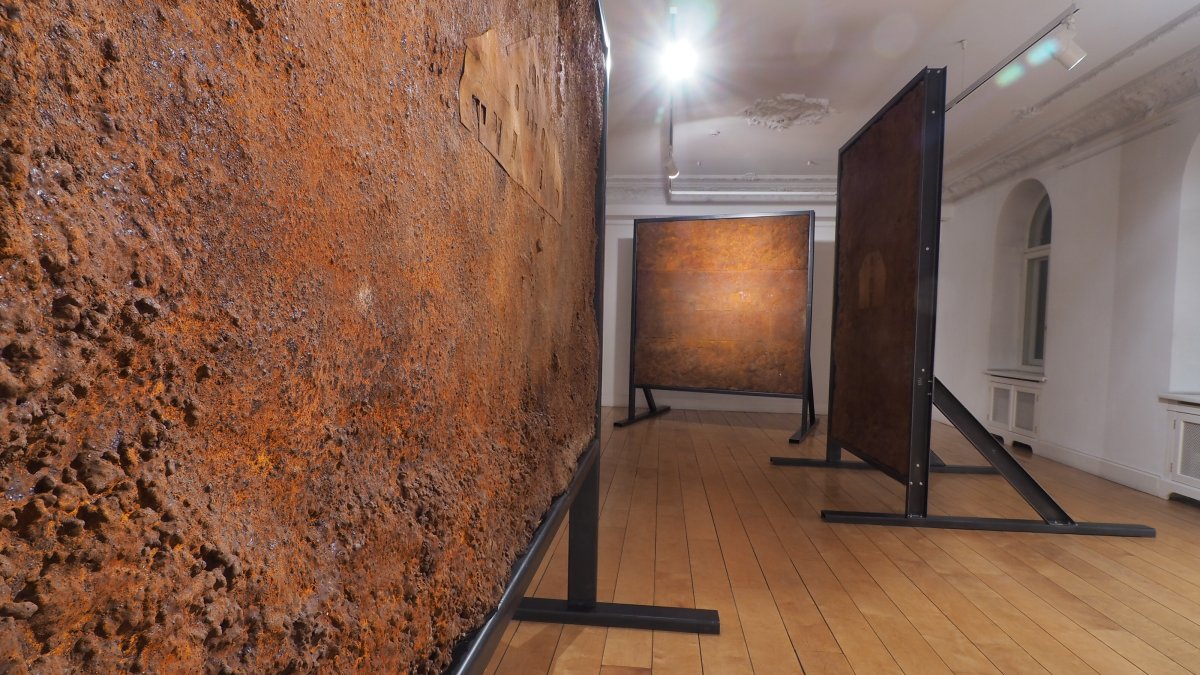 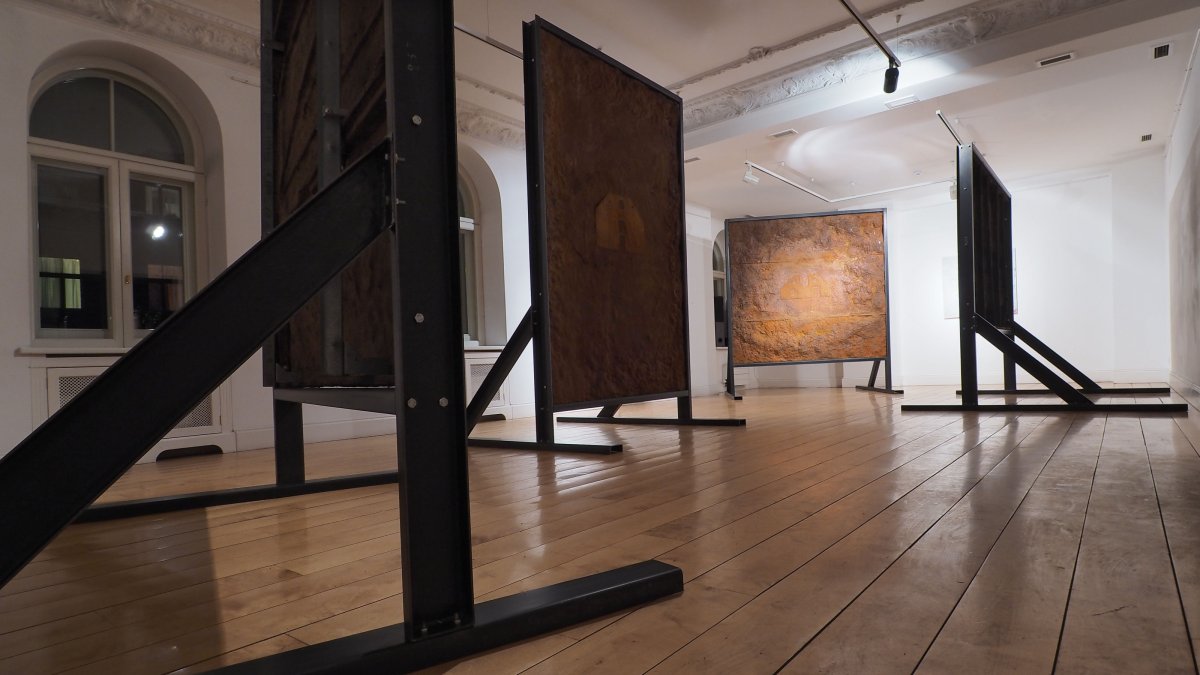 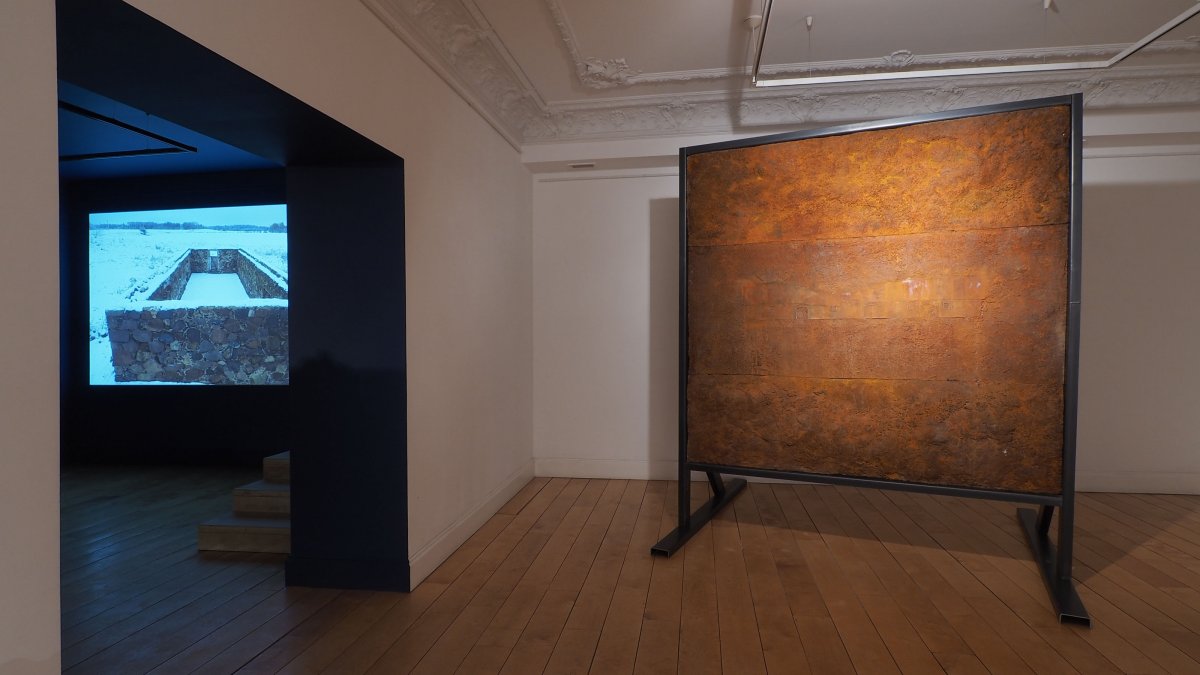 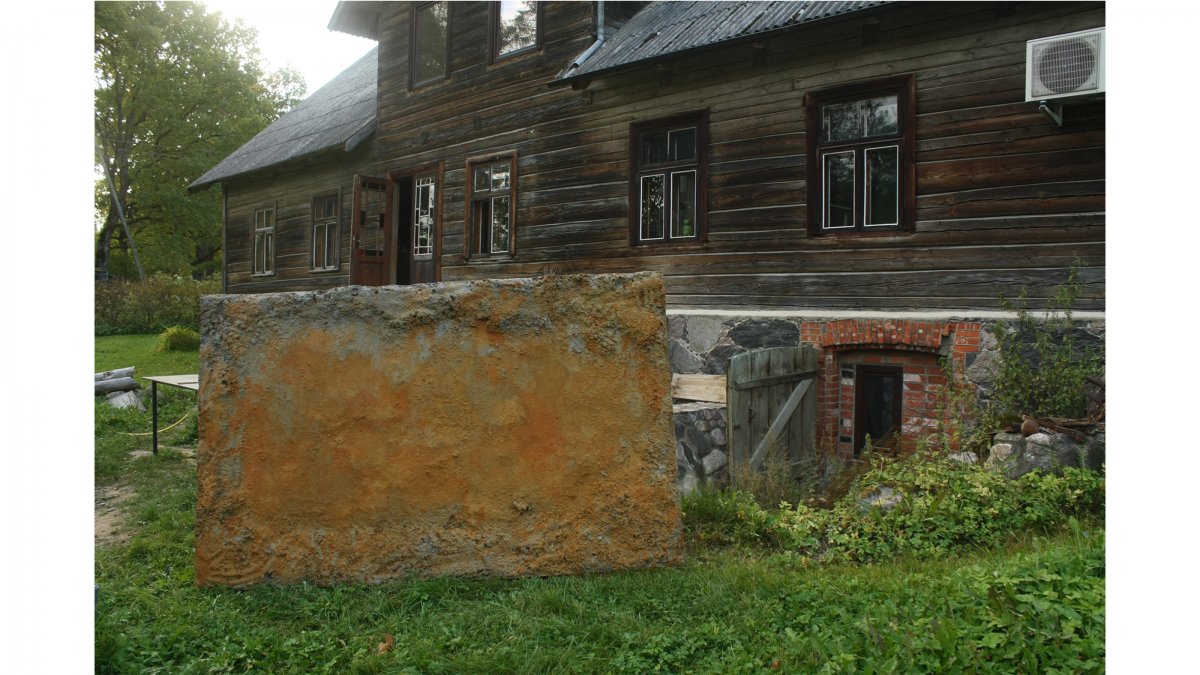 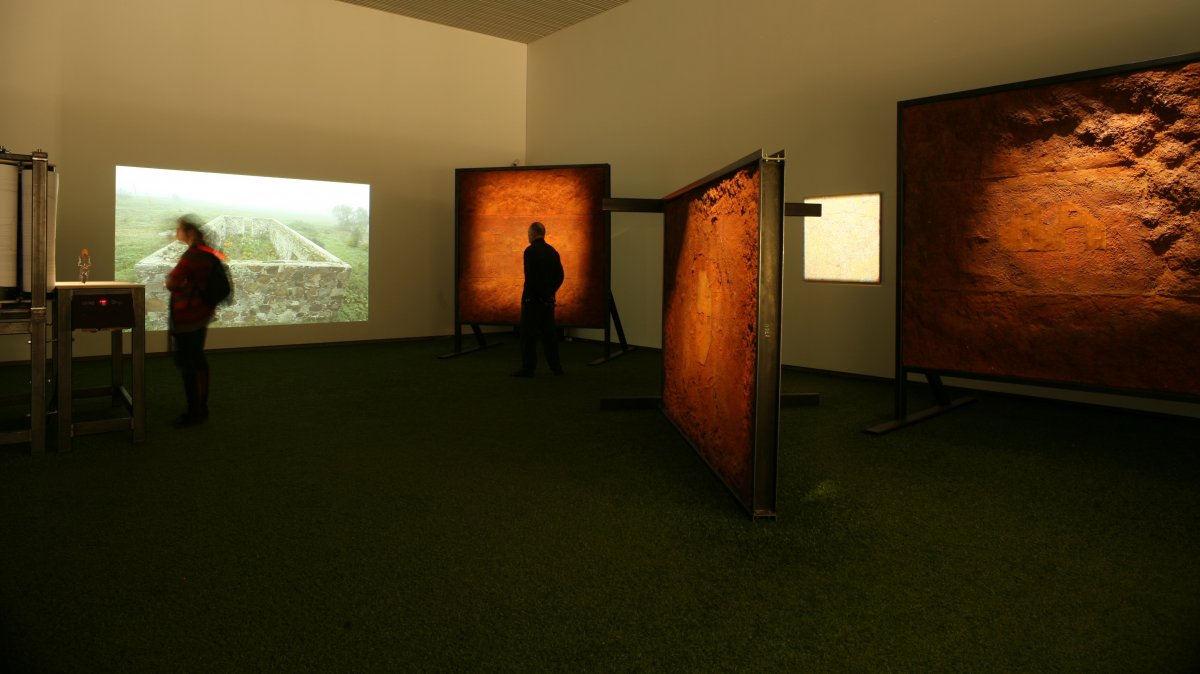 These works were first displayed at Ivars Drulle’s solo show, For My Native Land at the Alma gallery at the turn of 2016/2017. The exhibition addressed the portrait of Latvia’s diminishing countryside, depicting the artist’s everyday observations in the rural areas of the Vidzeme cultural region. Like an anthropologist or an archivist, the artist documented and collected personal experiences, observing years of changes in his surrounding landscape and the day-to-day lives of the locals. In addition to capturing objective, documental photos of abandoned and collapsed houses in the Vidzeme countryside, the artist created several objects, namely a small sculptural composition, a kinetic construction as well as large rust-covered iron plates, which amounted to a subjective and meditative reflection upon the changes in the country landscape of Latvia.

Four restored large-scale rust paintings are on show at Mobile Museum. The Next Season.

By travelling to and documenting abandoned country houses in Vidzeme, the artist observed that the foundations of the abandoned houses had left impressions on the earth. The artist describes the conceptual outline of the large-scale works thusly: “From afar, something akin to islands arises in the landscape – overgrown apple orchards, a well site and a loney chimney at the site of a former house and household. There’s tilled land all around, but at times the even rhythm of these fields is interrupted by the coarse texture of the abandoned households.” In order to create large-scale objects, the artist excavated a 2x2 meter field by the ruined houses. Mixing iron powder with acrylic resin, he obtained a hardened large-scale plate, which reflected a negative impression of the topsoil and continued to change in time, obtaining rust and changing its color. “The way a country household is an impression in the landscape, a rust painting is a direct impression of a small piece of land.” Each of the plates depicts building silhouettes worked over with rust, continuing to shift their color and slowly merging with the plane of the surface as a whole. The depicted building silhouettes represent the ideal standard of the proportions and look of ideal country houses, at which the artist arrived from the landscape flickering by throughout his travels across Vidzeme.

In an interview, the author states: “It was important to me to show that time marches on and these rust paintings change, as they are subjected to the influence of the atmosphere. A year from now, these works will look different, as the process continues. I don’t want to portray a tragedy of a downfall of sorts. It’s a normal occurrence. … I rather see it as a portrayal of my own time and place, of where I am. In a sense, it’s my own diary.”

In describing the exhibition, art critic Santa Hirša wrote: “The mechanisms of the global economy and local political power have turned the countryside into a landscape of ruin, but it doesn’t prevent national ideologies from presenting the “homeland countryside” as a value linked to Latvian selfhood and folk wisdom, which bear but an utterly distant relevance to the real daily life in the country … To the artist, and to many of us, the classical Latvian country homes and their usual proportions, and scales express a code of Latvian aesthetics, which we feel on an elusive, almost unconscious level. For My Native Land depicts the way the political and economic conditions are deforming this visual code. The deformations have been memorialized in the form of silhouettes on iron plates, somewhat reminiscent of peculiar tombstone engravings.”

For this exhibition, Ivars Drulle was named among the eight contestants for the 2017 Purvītis Prize. This exhibition was on show across Latvia, in the towns of Gulbene (Gulbene Municipality History and Art Museum, 2017), Rēzekne (Latgale Embassy GORS, 2018) and Valmiera (Valmiera Museum, 2019).

Ivars Drulle (1975) is a sculptor who often uses elements of narrative, sound, video and text in his creative practice. In his work, Ivars Drulle often reflects upon public occurrences that are ambivalent and hushed down, examining said occurrences at the points where they touch upon his private life. His works range from small groups of tiny figures to huge sculptural works and complex installations of objects. They often turn to researching human identity, using the press, the digital environment and his personal experience as a source. He graduated from the Art Academy of Latvia with a bachelor’s degree in sculpture and holds a master’s degree in visual arts from the University of Montana (US).