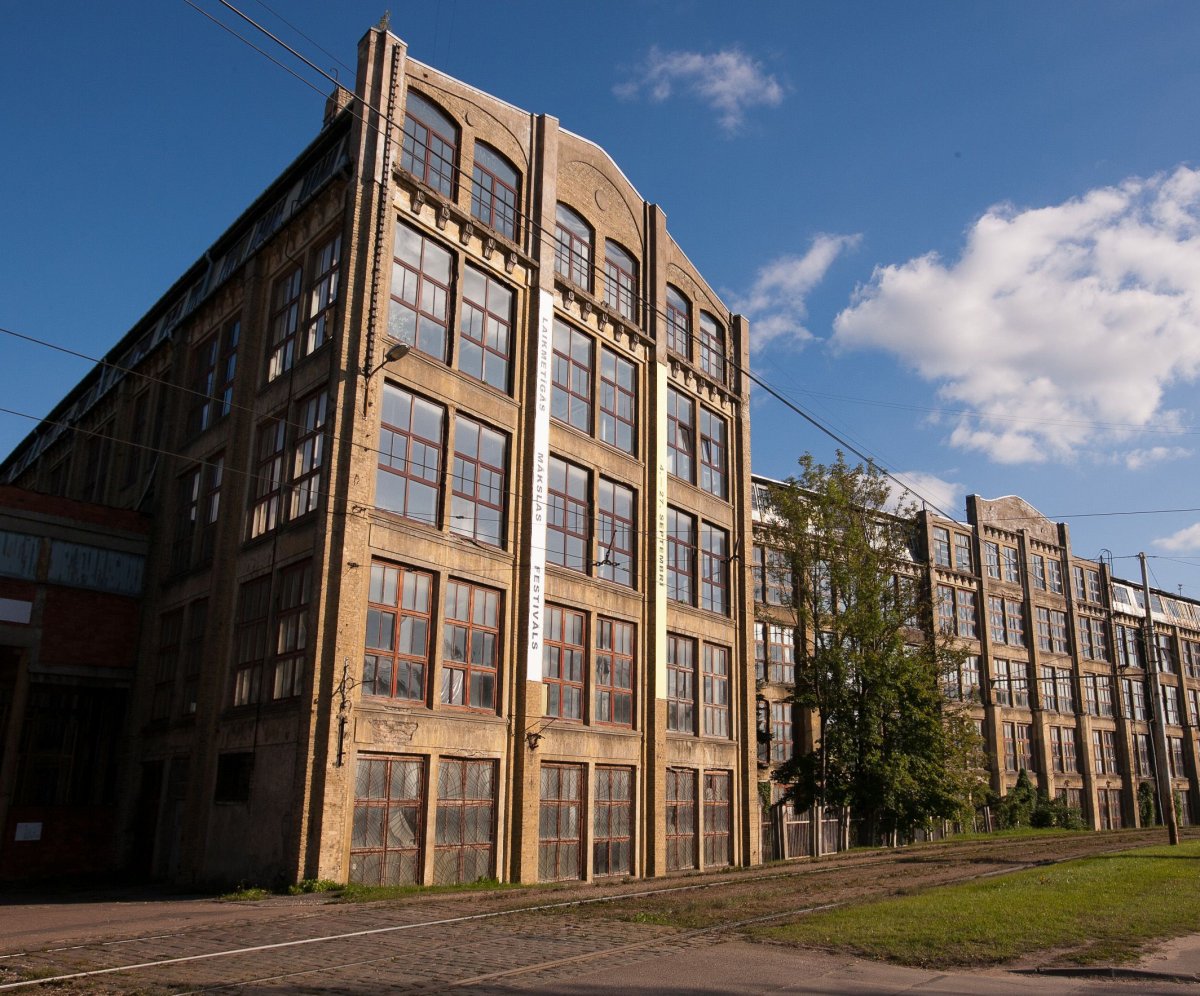 Solvita Krese, the curator of the exhibition Mobile Museum. The Next Season

During the time of self-isolation due to the pandemic, when an unprecedented amount of people had to change their daily lives and spend a great part of the time at home, watching TV series became a very widespread way to spend the time, becoming a substitute of sorts for real life, for in-person meetings with people, travelling, going out and other more or less habitual activities. In every episode of the new season, there appear characters we’ve come to know from earlier on, and this creates an illusory feeling of belonging to a group of friends or a family, or at the very least lets one feel strong empathy for the protagonist of the series.

Tracking the dynamics of TV series, I recalled the exhibition Mobile Museum that the Latvian Centre for Contemporary Art (LCCA) held in 2007 at the former shipyard building and the Ēdnīca project space in Andrejsala. The exhibition urged to revisit the idea, current at the time, for creating a contemporary art museum. The famous architect Rem Koolhaas had proposed a sketch for the building, to be constructed by refitting the historical thermal power plant in Andrejsala. Together with the artists, LCCA invited a discussion not only about the museum building but also about making the museum collection and the vision for its development.

A number of similarities are evident when observing the situation. We, the Latvian Centre for Contemporary Art, are putting up an exhibition, a park for the art, at a degraded post-industrial zone of the city and asking the same old questions – when will there be a contemporary art museum in Latvia? What will it be like? On what principles is its upcoming collection being made? This contemporary art museum, which we have been expecting for decades by now, has become a fanciful image, a sort of a recognizable character in a TV series making its appearance now and then within the frame of Latvian cultural politics. That’s why it seemed perfectly logical to give the exhibition at the former Boļševička textile factory the name of Mobile Museum. The Next Season.

Work by artist Kristaps Ģelzis at the exhibition Mobile Museum in Andrejsala, 2007.

Douglas Crimp (1944-2019),  one of the most influential art critics of his era, published an essay titled On the Museums Ruins in the 1990s. It became the basis for a collection of essays with the same title, in which the author expanded a scathing criticism of institutions and outlined a paradigmatic shift from modernism to postmodernism. A significant reference Douglas Crimp mentions in the collection of essays is the Imaginary Museum by French writer, art theorist and public servant André Malraux (1901-1976). This museum would collect countless photos of artworks of different eras and places. “We could refer to these not as ‘works’ but rather ‘moments’ of art,” says Malraux.

Work by the artist collective IRVIN at the exhibition Mobile Museum in Andrejsala, 2007.

The LCCA archive was, to a great extent, shaped from such “moments”, i.e., photos of artworks, which are part of the documentation thereof and are in a way creating an Imaginary Museum to compensate the non-existence of a contemporary art museum. As early as 2007, looking back at the work of the previous decades, an exhibition based on the materials in the records of LLMC was set up at the Ēdnīca project space.

LCCA exhibition documentation exposition at the exhibition Mobile Museum in the project room Ēdnīca in Andrejsala, 2007.

Now, thirteen years later, in the context of the ruinous landscape of the former Boļševička textile factory, we are displaying works of art of the past 30 years, through which we invite getting acquainted with a significant segment of Latvian contemporary art, imagining the way these works could populate a non-existent museum, and to reconsider the role of art institutions within the society of today.

Seeing as often enough the artists are unable to ensure suitable storage conditions for these works, they usually end up in their barns, at the country houses of their friends and relatives or, in the worst-case scenario, are taken to the Getliņi landfill. These are no compact objects that an art collector or an entrepreneur interested in art can purchase and put up on a wall in their dining room or office space. These “homeless” objects of art are deserving to become part of the collection of the Latvian Contemporary Art Museum, but here, removed from their initial context and put on show together, these works create a polyphonic message about the development of Latvian art history and raise the issue of the necessity of a contemporary art museum.

Due to the fact that most of the works on show at the art park had been severely damaged due to unsuitable storage conditions, we had to reconsider myriad aspects tied to the restoration, renewal, historical value, authorship, and authenticity of works of art as we were making the exhibition. As a result, we had the chance to test a rather broad spectrum of methods of “resuscitating” the disappearing works of art, restoring and reconstructing them, creating replicas, turning towards allusions to initial sketches, transforming the remains of the historical works into new works or making do with photographical documentation. Despite efforts lasting more than a year, we were unable to exhibit Ginters Kruhmolcs’ In the Name of the Rose at the art park. Even now the work, like a hostage of unfortunate exhibition practice, remains on 30 Kungu Street in Liepāja, western Latvia, with a fragment of the work visible over the wall bordering an industrial territory. The most fortunate of the works displayed at the art park is Ēriks Božis’ Sheltering Sky. Its original is now stored at the Latvian National Museum of Art, and there’s even hope it will, someday, be put on show at the museum’s exhibition hall as part of an exhibition.

The work In the name of the rose by artist Ginters Krumholcs at the  Sculpture Quadrennial Riga Anatomy of Integration in the Latvian Railways History museum, 2012. Photo by: Didzis Grodzs

The visual code of this exhibition is likewise a reference to a 1997 artwork, namely a stylized pictogram by Mārtiņš Ratniks with the title Transplantator, which was, in the form of a large-scale drawing, displayed to a limited audience on the rooftop of the Dailes Theater during the annual exhibition by Soros Contemporary Center of Art-Rīga, titled Opera.

The work Transplantator by the artist Mārtiņš Ratniks at the Soros Contemporary Centre of Art-Riga, titled Opera, 1997.

The dilapidated landscape of the former Boļševička textile factory, biting and picturesque at the same time, serves not only as a capacious metaphor for the institutional weakness of the ecosystem of art, considering the acute necessity of a contemporary art museum, but also sheds light on the fascination of ruins and degraded zones in the context of art. Such abandoned territories, which can arise due to geopolitical crises, economic collapse, environmental disasters or failures in urban planning, are rather common in the city landscape. One agrees, of course, with writer and historian Rebecca Solnit that “a city without ruins and traces of age is like a mind without memories”. And the territory of the former Boļševička textile factory offers a splendid opportunity for such-like travelling across memories, in the context of Latvian art, history as well as industrial heritage.*

It is fascinating to see the way that works of art, outside of the context where they were first made, allow for new readings as to what they mean in the entropic atmosphere of the dilapidated landscape, weave a uniform message interwoven with intonations and feelings of the present moment – a mélange of fatalism, hope and longing. Observe the portentous sound of the apocalyptic warning – “Tomorrow never comes” – in Artūrs Virtmanis’ illuminated arc, which welcomes the audience, fatigued by the pandemic, at the entrance. It resounds further in the artists’ reconstruction of the sinking ship of hope. While all that’s left of Krista and Reinis Dzudzillo’s Respice post te. Hominem te memento is the magical word ‘Memento’, which grows out in monumental fashion out of a pile of rubble and invites the audience to come up with an appropriate ending of the sentence. Our mortality is likewise attested in the site-specific installation by Katrīna Neiburga, Andris Eglītis and Jānis Noviks, which offers observing the slow decay of peat sculptures in response to the age-old human strive for eternal youth and immortality.

The works of Evelīna Deičmane-Vida, by now dead already, are revived as a new visual image creating an optimistic vertical, a sort of a vernacular spaceship with an accompanying soundtrack that captures the living voice of the former works of art – similar to the way in which Ivars Drulle’s rust paintings preserve the impressions of the soil of the disappearing homesteads in the Latvian countryside.

By slashing the canons of a consumer society, Monika Pormale’s slogan Want nothing for no money! gets to the very epicenter of pandemic fatigue and boredom. Ēriks Božis’ telephone booths, the rotary dials of which are as unreachable as the normalcy of our former life, are raised on a pedestal and grouped right next to Pormale’s work. The irony continues in the artist’s Sheltering Sky, with an offer to take shelter under a drop ceiling characteristic of a euroremont (an interior redecoration according to European standards), which detonates in one’s consciousness as a reminder of the past year and a half spent locked down inside our apartments.

Aivars Bikše’s Black maiden urges one to adjust to every situation, changing one’s identity according to the circumstances. While Dace Džeriņa’s dance floor, initially created during the re:publika project as a platform to engage the inhabitants of city neighborhoods in joint activities, now, in the background of Boļševička’s post-industrial ruins and the pandemic, seems to allude to the Danse Macabre.

It is delightful that there’s a possible happy ending to the story that can be surmised from the exhibition at the art park. Lifting one’s eyes up to the golden Buddha sitting on the roof of the old boiler house, or seeking out Brigita Zelča – Aispure’s archetypal sculpture of the Venus of Willendorf, it seems that we can hear a quiet promise that there are still things that can be saved. During the pandemic, when hugging and physical intimacy has become something exclusive and impossible, there’s likewise a special meaning to Monika Pormale’s performance, which has been documented in postcards. “The initial idea about conversing in ‘the language of the heart’ has been superseded by the need for physical contact. This time has shown that we cannot do without physical contact – a handshake, a hug, or meeting another’s eyes,” the artist says. If you have one of these postcards in your pocket, it’s possible that the feeling that “it’s going to be okay” will become present and enduring.

*  The Boļševička building was constructed in 1913. It was planned to open a high-end shoe factory called Buffalo, using the skin of American buffalos for production. However, during the First World War the building became a military hospital and housed several workshops producing things needed at the front. Later on, in 1941, it became a factory of weaving and spinning and came to be called Boļševička. It ceased its operations in the 1990s as production drew to a halt. Since 2014, when Survival Kit 6 took place at the former Boļševička textile factory, the factory grounds have been used for different culture activities a number of times. In 2015, part of the Homo Novus Theatre Festival program was moved here, whereas in 2018 it became one of the locations of the Rīga International Biennial of Contemporary Art (RIBOCA). The storage building, where Andris Eglītis and Katrīna Neiburga’s work was made in 2014 as part of the festival Survival Kit 6, still houses the workshop of artist Andris Eglītis, and it has served as a platform for a number of exhibitions and culture events.